A good few years ago I was teaching at an event arranged by Bushcraft UK. At the event I met Mors Kochanski, a very nice and knowledgeable man who is probably considered by most to be the father of Modern Bushcraft. At the end of the event whilst chatting with Mors he presented me with with a book. 98.6 Degrees: The Art of Keeping Your Ass Alive 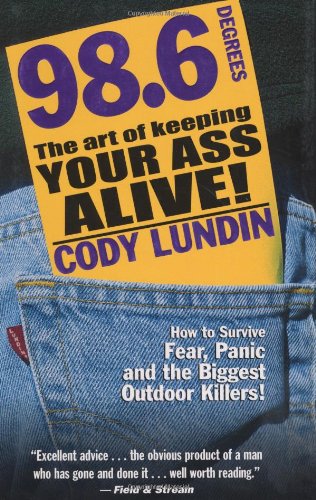 On the way home I started to read. Now this isn’t a large book, but it packs a lot of knowledge into the pages within the cover. The basic idea behind the book is that when your body core temperature alters by more than a certain level it has a drastic effect on how your body performs or doesn’t perform as the case may be. This was no new concept to me because of the environments that I had worked in, I had both seen and at times felt the effects myself.

This was the first time however that I am aware that a lay person had put together a book that actually listed / dealt with the potential hazards of core temperatutre change for people working in outdoor environments or having been caught in dangerous/survival situations. The book itself is actually all common sense and could potentially have been a very boring text of a clinical / medical nature. However what Cody Lundin has done is to interject some light humour both in the text and as diagrams (which I found very reminiscent of Elsworth Jaeger’s Wildwood Wisdom). It would appear that Cody has a sense of humour and of irony, actually a major requirement of a good survival instructor. The Book contains loads of well thought out hints and tips, suggested contents for a grab bag that doesn’t include the kitchen sink and as such is much more realistic.

98.6 degrees is a well balanced and thoughtout book. It has a small amount on small basic survival kits which don’t reqire a lowloader to shift them, it contains the odd story to back up the research and data that has been quoted by the author, all in all it’s a damned good read for anyone and not just people interested in the great outdoors